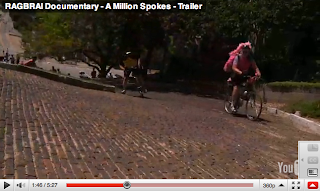 Last year, a documentary production company followed us across Iowa and this year they are releasing their film, “A Million Spokes.”  This  feature-length documentary will make its world premiere in Sioux City at the start of RAGBRAI XXXVIII.

Yes, you can see me, Z-Bird, making my way up Snake Alley in Bettendorf at the final day of the ride (about 1:45 into the trailer.) It shows me riding in the 5-minute trailer of the documentary. Who knows what will be included in the full-length documentary.


The film focuses on some of the riders and teams that journeyed across the state last summer.  The film highlights the diversity of RAGBRAIers as some come for the challenge, some come for the speed, some come just to party through the ride and others derive very specific meanings for the ride.

This special screening in Sioux City prior to the 2010 RAGBRAI will mark the first time this film will be viewed by the public.  The film’s director, Varda Hardy, producers, Ken Gorrell and Talia Rodriguez-Shakur, will join many of the characters you will meet in the film to screen the project in its first public viewing.