Yes, we made it to the "Mighty Mississip" this afternoon. Our final town was Bellevue. You can see the four Flamingos who flew across Iowa with RAGBRAI this year. Theyy are (fom the left) Big Bird (Mike Knapp), Whiny Bird (Mica Lorenz), Weird BIRD (Juanita Williams), and Z-Bird (me-Leigh Zeitz). We are dipping our front wheels into the Mississippi to signify that we made it. What a trip!

Posted by Dr. Z No comments:

Early Start on the Last Day

it's the last day and we got an early start. That means that we woke up at 5:30 but for some reason we still did't get on the road until 7:30.
Posted by Leigh No comments: Here we are with Steve & Liz Kilgarde. Liz used to be Deb's principal and they kindly opened their house to the Flamingos and Team Oz. We had the opportunity to swim in a pool, steam in a hot tub and enjoy S'mores. Rained a little last night but not enough to smear the artwork on the Flamingo truck.
We got off to an early start. This time it included Mike, Mica, Deb, Heather and Juanita with Bev & Kathy as the valuable support team.
We rode to the small town of p???? Where we saw a band named "The Second Shift.". This cleaver and innovative band really ROCKED.
Posted by Dr. Z No comments: Cedar Falls was by far best stop of the trip. I don't just say this because I live there. I have heard this from other riders too. You can see the troop of riders that left from our house. Balding Eagle and Betty joined us in CF. The rest of the gang slept at home and met us in Denver. We left @ 7:40 and covered the 18 miles to Denver rather quickly. Made it to Denver by 9:20. Met the rest of the gang there an had a great trip. It was hot and had a bunch of headwinds, but it was the most beautiful terrain of the trip. We went through the Amish country. Also went through some tiny towns. I went through Clinger and didn't even know it. Pulled into Indendence where they had an awesome fair ground. Stayed in the lovely home of the Kilgardes.
Posted by Dr. Z No comments:

Things may look a little crazy

This has been an interesting week.

I had some problems with the blogging from my phone so you may find that
they are not in sequential order as I post them from my phone. Bear with us
and I will fix them when we return. We actually left at 7:30. Had a wonderful evening at the Ditsworths and their lovely kids: Xander, Accai, & & Adelinne. LOOK OUT WORLD, Here we come!!!!
Posted by Dr. Z No comments:

How many flamingos does it take to empty a chinese restaurant? The team stopped in Charles City at the Human Buffet (I think that was the name.) Nice thing bout RAGBRAI is that all bets are off...so are any aspects of modesty. We entered the restaurant and it was half full. We were a bit rambunctious but fun loving. The stories ran wild and it was obvious that the RAGBRAI craziness has set in.
Posted by Dr. Z No comments: Well, we're off. It was our typical belated...no...beleagured start. Meant to start @ 8 but didn't hit the road until 11:30. Here's a photo of our illustrated truck with the usual cast of characters: Biig Bird, Z-Bird, Whiney, 'Lzy Brd, Kat Bird, Mama Bird, Weird Bird, & Crafty Bird. What a CREW!!
Posted by Dr. Z No comments:

Birthday Ride for the Flamingos 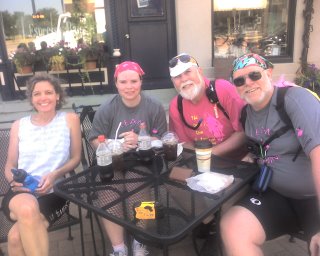 RAGBRAI will begin in one week. We need to continue with our training. Weird Bird, Splat, Big Bird, and  Z-Bird made the flight. Here we are at a break @ Cup o' Joe's. We had a number of people recognize us from the KWWL broadcast last night.
Posted by Dr. Z No comments:

Team Flamingo Hits the Road for the Big One

Once a year, Team Flamingo takes the MASTER ride to Center Point. This is
the 78 mile ride that proves to us that we can ride a full day in RAGBRAI.
No matter what anyone says, this ride isn't about endurance nor distance nor
building teamwork (although all of those are important.) This ride is about
TENDERLOINS. It is a 39 mile ride to enjoy the tenderloins at Jonesey's in
Center Point.

Anywho, we met at the Evansdale Trail Head at 8 AM to begin our challenging
trek. The brave folks for the day included Big Bird (B-Bird was delivering
mail and preparing for their trip that they would be leaving on that day),
New Bird and Music Bird, Z-Bird, and a new rider who was a friend of one of
Big Bird's employees. This new rider was Deb. Rumor had it that we would
be meeting Salsa Bird in La Porte and that Ron and Denise Birds would be
meeting us on the way.

We took off and had a great ride to La Porte. It was interesting to meet
with Deb and have Big Bird tell her his stories of many RAGBRAIs gone by.

It was a Flory reunion at La Porte. Salsa Bird had driven there and Ron and
Denise had left Evansdale long after us but made it to LP only a few minutes
after we arrived.

We took off for La Porte. This was the first time that I (Z-Bird) had ever
traveled this far along the route. The trail turned into gravel after we
left McFarland Park. It wasn't too bad.

We made it to Center Point where we were overwhelmed by the size and
quantity of food. Look at the photo and you will see that the large
tenderloin is larger than Big Bird's head - and THAT'S saying something!!!

It was hot today. Probably about 95 degrees. That is the ultimate test for
RAGBRAIers. It's important to drink LOTS of water on days like this.
Otherwise we can become dehydrated and suffer from heat exhaustion. Some of
our riders had some problems with this and had to bag the ride. We are
deeply indebted to Kat Bird who drove down from Cedar Falls to pick them up.

We hit some rain on the way home but it was a good ride.

Perhaps my greatest accomplishment for the day was that I (Z-Bird) made it a
Century ride. I began my day with a 13-mile ride from home. This meant
that I left Cedar Falls at 6:30 AM for the 8:00 ride. After the ride, I
finished by riding my bike, Bertha, back to my humble abode. This actually
accrued to a 105 mile ride in 13.5 hours from door to door. Actually it was
about 9.5 hours of actual riding.

Today's ride was fun. We got off a little late but were ready to have a
challenging ride of 20 miles or more. It was a good group of Big Bird, New
Bird (Carolyn), Music Bird (Bryn), Crafty Bird and Me (Z-Bird).

I have been having a problem with my bike. My odometer stopped working. My
rear tire is wobbly. My bike's squeaking. But I gotta ride!!!!

We took off from Pfeiffer Park. Rode north and then east towards Gateway
Park. We rode into Big Woods Lake but found that the City had decided to
rebuild the trail that leads to Lone Tree Road. We turned around and then
went back.

Big Bird and I discussed lots of different trails that would make up for the
unexpected detour. We were in the middle of the discussion when Big Bird
yelled out, "Deer!" Now I know that Mike and I are close, but . . . .
Really. Here he was calling me "Dear." I was contemplating this when I had
to swerve to avoid hitting a brown four-legged animal that was crossing the
road.

We got back to the cut-off leading over the Million Dollar Bridge. Crafty
Bird said that she had a headache so we decided to escort her back to her
car. By the time we got there, we had all rationalized a reason to stop
riding. I needed to go home to work on my bike. Big Bird had to get ready
for going to Washington D.C. New and Music decided that they needed to ride
to 4 Queens to get an ice cream.

Now we just need to get ready for the Monster ride on Saturday. We will be
riding to Center Point to get some great Tenderloins. Should be a 78 mile
day. That will be fun!!! Well, last night was a good night for riding.

Per our team's training calendar, we met out in Evansdale at the Nature Trail Head to begin our trek to La Porte. It was a good group of folks. It included Splat (Marybeth), Lazy Bird (Chris), Me (Z-Bird), Carolyn and Bryn Hildebrandt. I just realized that Carolyn and Bryn don't have nicknames. We will have to fix that this week. Wonder what we could use . . .

It was a good ride to La Porte. Carolyn's only quest was to get some ice cream at the Family Tastee Freeze in La Porte. We all happily joined her when we got there. Unfortunately, they didn't have any of the flavor burst ice cream but we had to settle for the twists.

I would guess that we probably spent too much time eating ice cream in La Porte because we didn't get back until dark. I was the only person who didn't have a bike light. It was a challenge riding through the dark at 12 mph - hoping that there wouldn't be any low hanging branches.

We will be riding up Kimball on Wednesday. It is about 18 miles. Goes right by Weird Bird's (Juanita) house. We fly up to Eagle Center. A small 2-blink town with wonderful people.

The big ride will be on Saturday when we ride down to Center Point for some of the best tenderloins in Iowa.